I used to watch the sky and the stars in the sky when I was a kid and often worded about them. Even now I have a curiosity regarding the stars and the planets. So I never missed visiting Birla Planetarium when I was at Kolkata. It was situated close to Victoria Memorial, in Chowringhee Road. It is popularly known as Taramandal in Kolkata. Since it was very close to our hotel, we had no difficulty in going to the place. It conducts shows relating to stars, space, galaxy, heavenly bodies and other such subjects daily from 12.00 noon to 7.00 pm. these shows are conducted in English, Hindi and Bengali, and sometimes in Gujarati, Oriya and Tamil as well. 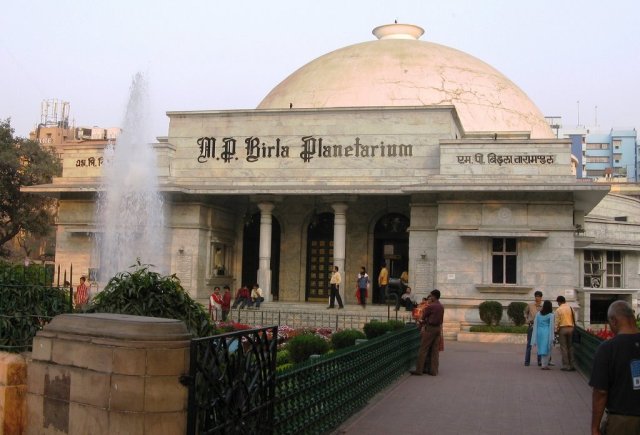 As we reached the place, I saw that it was a spherical structure, somewhat similar to the Sanchi Stupa. There were already many visitors ready to go inside and we were lucky to get tickets for the next show. We got in and took our seats and found that it was full with the visitors. It had a capacity to accommodate about 500 people at a time.

Soon the lights went off and the show began. It was in English, and first of all we all were welcomed to witness the show. It was dark inside and slowly we could see the sky above lighting up with various stars and other heavenly bodies in it. It felt as if I was lying down looking up the sky at night and watching the stars. We were offered a brief explanation of how the stars were formed, the names of stars, and their importance and so on. We were so immersed in the show that we did not notice that one hour has passed. Soon the show came to an end and we got out, feeling the bright light of the sun on our face.

We also visited the astronomy gallery and the Celestron C-14 Telescope with ST6 CCD camera, solar filter and other accessories. It is the largest planetarium in Asia and the second largest in the world and we were happy that we had the opportunity to visit it and learn about the celestial bodies.