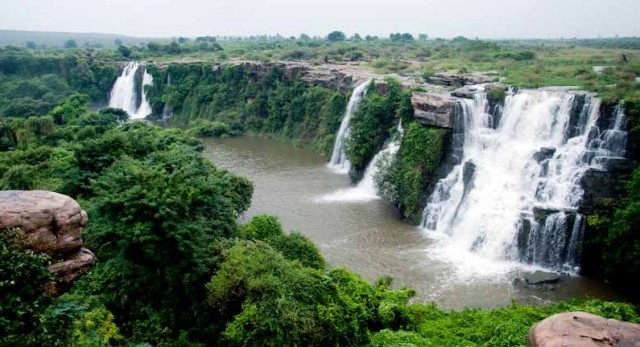 Ethipothala Waterfalls is one of the best places to visit and to revive the body and mind and henceforth, I arranged a visit to this spot. Despite the fact that it was 328 kilometers far from Vishakhapatnam, My adoration for nature pulled me towards this spot.

Being a budget traveler, I took a bus to the spot and after a long journey I reached the Nagarjuna Dam. I spent some time exploring the dam and visiting the Hydro Electric Project. The entire zone is covered by trees and the area around the falls was surrounded by lagoon.

The fall is located around 11 km far from the Nagarjuna Sagar Dam and is a spot to enjoy very near to nature. This magnificent and enchanting Ethipothala Waterfalls falls from height of 22 meters from the top. This is the union of 3 rivers called Tummala Vagu, Chandravanka Vagu and Nakkala Vagu.

I reached the falls around early afternoon. It was a fabulous sight to see the water moving down to the foothills. The lagoons around the falls were changed over into a crocodile reserve by the department of forest. . So there are a lot of crocodiles in the tidal pond. I was delighted to see in a few crocodiles and reptiles living in their common environment.

This place is a home to fabulous temples and caves. It was for sure a wonderful view of the falls in night light. The whole area is lighted with the bright lights which were fixed close to the falls. The distinctive shades of lights offered added magnificence to the falls.

I spent time until night and came back to the Dam. I took lodging close to the Nagarjuna Sagar to appreciate the night there and dozed late. There are a lot of spots to visit at Guntur such as the temples close to the falls Ranganatha and Dattatreyaswamy sanctuaries. Next morning I went to visit the temples and caves. It was a spectacular experience to cherish in.

Description : Get to know the vast and vibrant history of the harbor city of Vizag from the life- size portraits and vintage war collection of guns, armor sets, steel bows and swords displayed in this museum. It was a life safer for me while I was baby- sitting my little niece. She loved the place and stood before the instructions board to apply all the phonetics she knew to read them. The museum is worth more advertisement and popularity.

Nexxt was the most awaited destination in my agenda the Nagarjuna Sagar Dam. I have visited this place before and the greenish foliage and the forest attracted me the most. The visit to this place helped me to learn more about nature, flora and fauna of the place.

The Nagarjuna Sagar Dam is a gigantic structure and vehicles are not permitted to run over the dam, rather, there is a bridge constructed for transportation reason. The dam with its massive size was a sight that held the breath of anybody.

Since it was the beginning of the spring season the shutters of the dam were not open. But during my last visit I was fortunate to visit the dam during the rainy season. The all the shutters of the dam were. Then dam was at the loaded with its eminence and I was delighted in the water splashing from the dam. The power of the water took the water drops up to two kilometers. It was a captivating and cherishing experience. 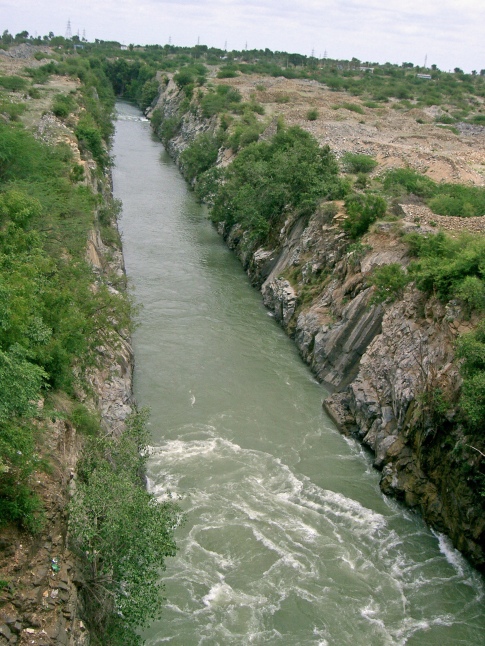 The Krishna River streams towards east coming to Vijayawada from here covering the Nallamada Hills. I went through the bridge and at one point I gazed at the water streaming quickly.

It was an enchanting day for me as I could visit the dam and the falls. I walked through the forest and observed the canopy. The smell of the green trees and the sound of the water falls were magnetizing. I observed the soil; it was wet and black by the residuals of the decayed leaves and branches.

I further visited the hydro electric project Nagarjuna Sagar, I was spell bounded to see the monsters turbans which produced electricity. The stream was gushing and the quickness of the water made an impact on the turbans producing electricity. 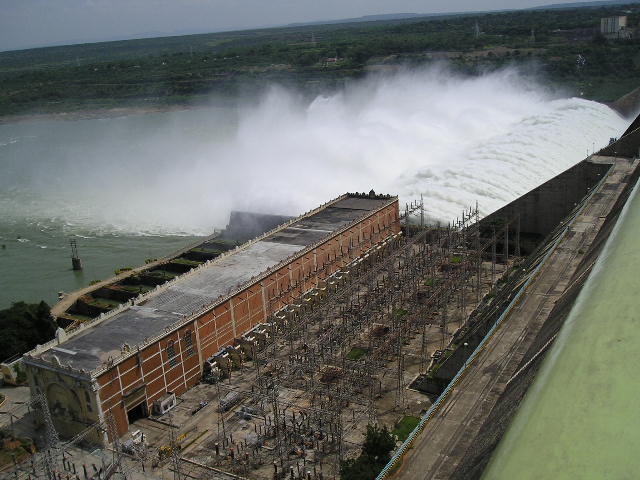 I went down to Ethipothala Waterfalls since it was starting of summer the water current was very less. I went down into the forest with the help of a forest guide to learn more about the environment.  The whole lagoon is reserved for the crocodile reserve. We walked around the forest unit evening and I came back to the hotel room which I booked I the morning. The sight of the dam in the night was magnificent. Next morning I made a point to have a walk for a morning to the dam. It was very pulling me towards it.

Our rooms were spacious and the food was really good. The wifi was more than lavish to work with. Car parking facilities and the location is very ideal to visit the tourist spots during daylight and get dressed for dazzling parties in the bar at night. We were well treated and the service seemed excellent.

I wanted to vist to Mangalagiri Temple, which is found 25 km far from the Guntur City. There were numerous buses connecting Guntur and Mangalagiri thus I chose to catch an early transport to the temple.

I reached the foothill; it was right around 8.30 am. I gathered a few more details about the temples. Mangalagiri is one among the famous eight temples in India, where Lord Vishnu showed himself. I took after the devotees climbing the steps to Sri Panakala Laksmi Narasimha Swamy Temple. While climbing, I offered prayers to God to the foot shaped impressions of Maha Prabhu Chaitanya.

Inside the temple, I remained at the sanctorum and offered Pooja to God. Strolling behind the temple, I stopped at Sri Lakshmi Temple to offer my prayer to God. Close to this temple, there were steps leading to Unadavalli Caves.

I also visited the Gandala Narasimha Swamy Temple and lit a light, where there was no statue or idol . After the prayer to God, I descended to offer my prayer to God at the Lakshmi Narasimha Swamy Temple at the foothill. The temples are known to have the most astounding tower or Gopuram in India with a tallness of 153 feet and width 49 feet. The tower has eleven stories and its doors confront the east and west bearings.

The structural planning on the Gopuram is very attractive and demonstrates the craftsmanship of the builders. There is a tank on the back side, which is said to be manufactured to straighten the tower to prove support. The temple conducts celebrations, for example, Brahmotsavam consistently. It was getting hot and we needed to go to our next destination.

Before visiting the Undavali caves I visited the Nagarjuna Sagar Dam which is about 386 km away from Vizag. I stayed there to explore the nature. In the morning I went for a morning walk in the woods. After the morning walk, I felt my body and mind revived and restored. It was an awesome experience to stroll through woods enjoying the forest. The cool wind and shrills of squirrels were enamoring.

I went down to the Dam; Anyway, it was an astonishing experience to remain in the chill water. I sat on the stones for while and came to the hotel room to pack my things to visit Undavalli caves which was my next destination. 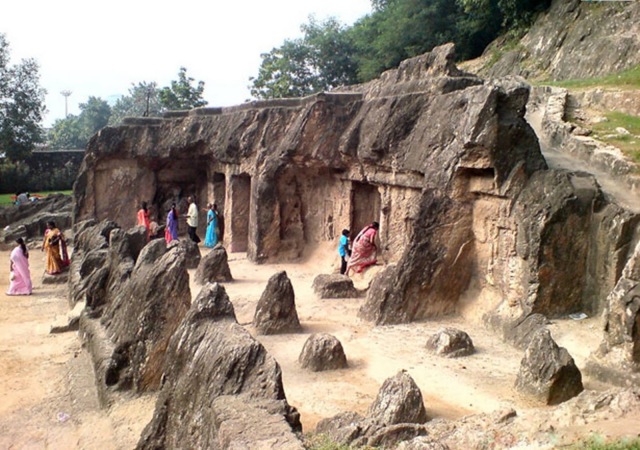 After 3 hours of journey I reached the Village. I felt the journey comfortable as I like traveling a lot. The Undavalli Caves are the example of rock-cut building design of India and caves are located at the Undavalli vilaage in Tadepalli Mandal, Moreover it is situated on the banks of the Krishna River. I traveled 22 km to reach the caves from here.

The caves were built out of strong sandstone around 4th and 5th century. I could see a few caves and the most prominent and biggest cave has four stories. The statue of Lord Vishnu is carved in single rock stone and is main deity here. The statue of God Vishnu is sculptured on the second floor.

Different statues of Brahma, Vishnu and Shiva were carved inside the caves. The caves showcase the craftsmen ship and excellent architectural abilities of Gupta Period. Since some caves were Buddhist religious habitation in olden days, the first floor showcases the Buddhist god and Buddhist figures. The walls are carved beautiful sculptures. The Undavalli caves were built by the Vishnukundina rulers of 420 to 620 A.D. 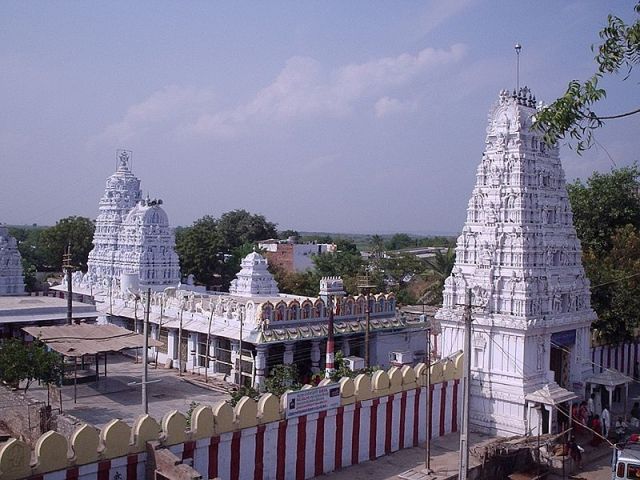 This temple is located in the Macherla town of Andhra Pradesh and shares a long lineage of tale with the town and the many dynasty that ruled this capital. The temple is worth visiting. The Ethipothala Falls cascading the mixed waters from the water bodies nearby is a few kilometers away and it’s a beautiful sight to be captured in a lens..