Dakshineswar is about 12.5 km from Kolkata city and it takes about 21 minutes to reach the temple. It is one of the largest temples in Kolkata and is dedicated to Goddess Bhavatarini, an incarnation of Goddess Kali. The temple was built during the period from 1847 to 1855 by the queen Rasmani of Janbazar. We had a cab arranged at the travel desk to take us to the temple. We were told by the driver of the cab that before visiting the temple we should visit another temple, the Adya Ma Temple and offer our prayers there. Here the darshan was provided only for a limited time we should be there by 10 am. We reached the temple by 10.15 am and after praying there we set off to the Dakshineswar Temple, which was only 2 km from here.

We reached the temple at 11 am and were impressed by the immense beauty of the temple. It is located on the banks of the River Ganga, known as Hoogly in West Bengal and is a large complex covering an area of 25 acres. The temple is open to the devotees from 6.00 am to 12.30 pm and then from 3.30 to 9.00 pm.

The main temple is surrounded by 12 shrines dedicated to Lord Shiva and there is a Shivalinga placed in each shrine. The courtyard also has a temple dedicated to Radha and Krishna. The temple is built in Nava-ratna (nine-spired) style, which is the uniqueness of the Bengal architecture. Inside the sanctum sanctorum is the idol of Goddess Kali, standing with one foot on the chest the Lord Shiva lying on the ground. The two idols are placed on a silver lotus with thousand petals. 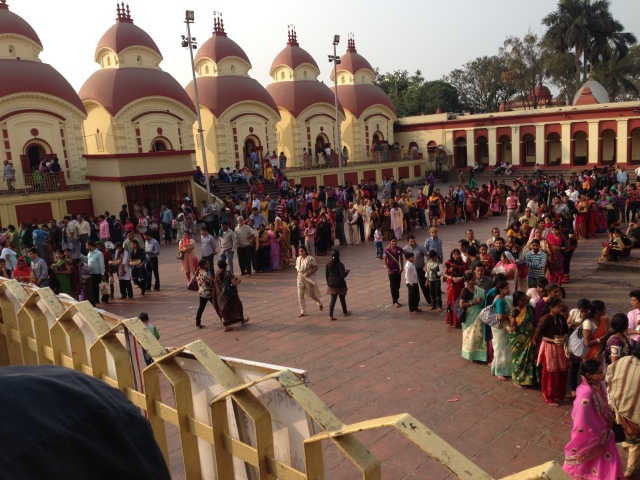 The temple is closely associated with the spiritual leader Ramakrishna Paramhansa, who along with his wife Sharda Devi, worshipped here until his death. He was also the spiritual Guru of Swami Vivekananda.

Tuesdays and Saturdays are the auspicious days to worship the Goddess and there is a huge rush of devotees during these days. The visit to the temple enlightened and filled our soul with spiritual peace.